"Be the change you wish to see in the world..." Gandhi 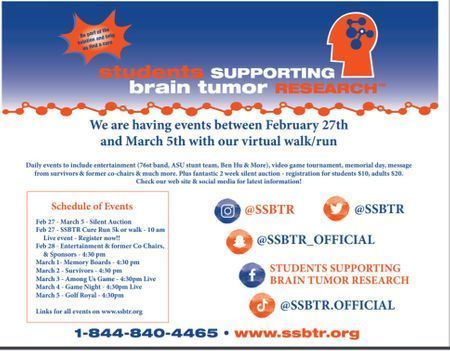 On May 4, 2018 Angel Carden was like any ordinary 8 year old boy. He was just finishing up 3rd grade and enjoying the last days of Little League Baseball.  After a day on the baseball field, Angel started to have seizures later on that night.  We rushed him to an emergency room and a CT scan discovered that Angel had a large tumor growing in the back of his brain. Our world felt like it was ending, we were scared, and we desperately feared for our son’s dear life.

Angel was immediately transferred by ambulance to Phoenix Children’s Hospital, only one of a few places in the country that could properly care for our son. By the time we were admitted the tumor was causing increased pressure to his brain. This caused Angel to continuously vomit, barely speak, unable to move and started to lose his vision. Angel’s neurosurgeon Dr. Ruth Bristol was the one to diagnose our son with Stage 4 Medulloblastoma. She let us know that he had to immediately have surgery for 2 shunts, to relieve the pressure on his brain before any permanent damage was done. We spent 14 days in the Pediatric Intense Care Unit and Angel’s final surgery lasted over 7 hours to remove his brain tumor.

We prayed so much during that time, and had started to meet so many new people that cared for our son as much as we did. After the surgery Angel could barely move or talk, which is common with posterior fossa syndrome. When we left the hospital at the end of May, Angel was in a wheelchair and his Dad had to lift him into our car to take him home.  Every day I watch my son defy the odds against him. He went to physical, speech, and occupational therapy; exceeded every goal they set for him in the span of 4 months. Since then Angel has went on to complete Proton Radiation Therapy as Scottsdale Mayo Clinic under Dr. Sameer Keole for about 8 weeks.  He now walks, talks, and went from writing with his left hand to right hand. Angel is even going to school when he feels up to it. Angel just wanted to share his story to never give up, and he wants to give back for every child that may be going through the same circumstance that Angel has been through.

PLEASE SUPPORT SSBTR to help Angel and the far too many like him!

A type of ultrasound scan can detect cancer tissue left behind after a brain tumor is removed more sensitively than surgeons, and could improve the outcome from operations, a new study suggests.

The way we think about treating brain cancers is being quietly revolutionized, buried beneath recent headline-grabbing announcements pertaining to COVID-19. A series of discoveries and breakthroughs in oncology, especially those targeting glioblastoma.

“They drill a small hole in the bone or the skull,” Desjardins says. “It’s just above the tumor. Then, they put a small needle in.” It’s similar to a brain biopsy, but instead of taking a sample out, they put something in the brain. In this case, it was a bacterial toxin that attached to the receptors of the tumor cells.

New analysis of 3D images and quantitative data "will help to appreciate from within how the tumor is built in its full dimensionality, and to identify where different cell types are located", explains George Paul Cribaro, first author of the study. "It provides more complete information than the usual 2D analyses performed for neuropathological diagnosis".

A research team from both Scottish and UK institutions using infrared spectroscopy at Diamond Light Source reports a major advance in brain tumor diagnosis made by. This will enable non-invasive diagnoses of primary brain tumors (gliomas) and accelerate results as they will be available in real-time from a read out showing the kinds of mutations present in the gliomas of their patient.

Scientists from Korea and China have developed a multi-functional platform using gold nanostructures that allows growth of 3D spheroid cancer cells and their real-time monitoring under drug treatment in a non-invasive and repeatable fashion, crowning a novel approach to creating a realistic brain tumor model along with a rapid and precise method for anti-cancer drug screening.